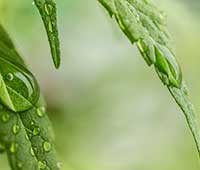 According to a survey published in the Spring 2016 issue of the Journal of the American Holistic Veterinary Medical Association (JAHVMA), 64.3% of dog owners and 66% of cat owners felt that the consumption of hemp products helped their pets either moderately or a great deal.

The survey was conducted by a team from the Department of Clinical Sciences at the Colorado State University College of Veterinary Medicine. A link was provided to the survey from a website of a company that sells hemp products for animals. Responses were anonymous.

When it came to anxiety, 49.3% of dog owners reported that the hemp products helped moderately or a great deal. For reducing inflammation in cats, the owners perceived the products were similarly helpful in 56.3% of the felines.

JAHVMA is a peer-reviewed scientific journal published quarterly by the American Holistic Veterinary Medical Association. The paper, “CONSUMERS’ PERCEPTIONS OF HEMP PRODUCTS FOR ANIMALS,” appears in the Spring 2016, Volume 2 issue of the journal.

AHVMA is the mindful leader elevating the veterinary profession through innovation, education and advocacy of integrative medicine.

Please be aware that AHVMA Exhibitors and Attendees may be contacted through email or other means by companies soliciting AHVMA hotel bookings.  Although they may imply otherwise, THESE COMPANIES ARE NOT ASSOCIATED WITH AHVMA.  Other companies may promise you a reservation that does not exist and upon arrival at your hotel you may be told that you do not have a room.

Please make your hotel reservations through our reservations link or by contacting the Gaylord Opryland Resort and Convention Center directly.  AHVMA cannot be responsible for any bookings made through any of these other companies.

Please be cautious about giving any company other than the AHVMA or the Gaylord Opryland Resort and Convention Center your credit card information as doing so could result in your credit card number being compromised.